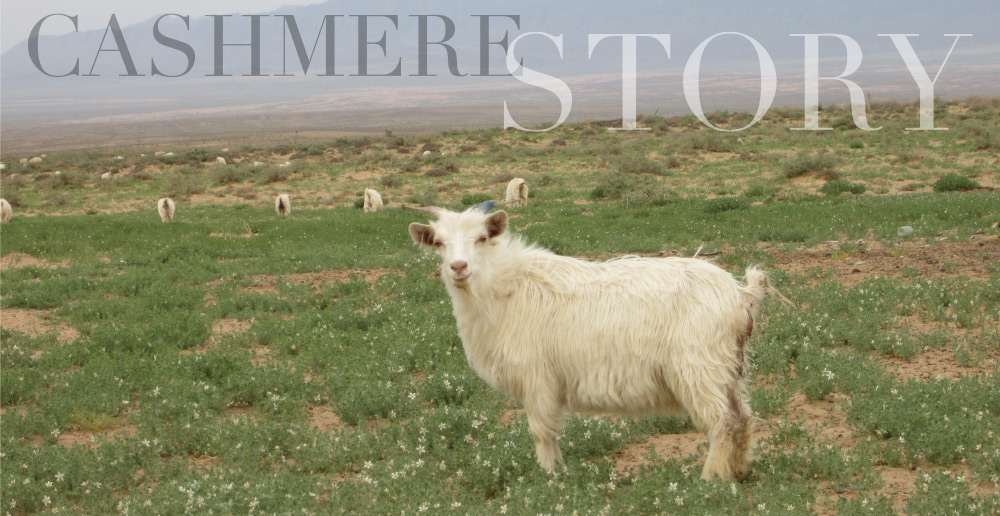 We arrived in search of really good materials and real materials in Inner Mongolia.
We support the shepherds who live there and directly purchasing the raw hair of cashmere from them.
In Japan, there is no other company that buys cashmere directly from the shepherds.
Once a year, we go there to meet them. It takes a day to get there by changing trains in Beijing or Shanghai.
Now it has become a modern landscape with wide roads and traffic lights overthere.
20 years ago, there were only horse-riding methods when going out from the ranch, and it was a place only of nature. It was modernized in about 15 years.
We can see there are roads, traffic lights, and more bikes and cars... when we visit there every year. The streets of the city changed year by year.

The shepherds made shacks and live by generating electricity from power generation overthere.
They keep their life in former time which is closely related to their production of high-quality hair of cashmere.
And, cashmere goats are grazed and raised in the same traditional way as in the past.
Because if you feed in the fence, the hair will become thicker and the quality of cashmere will become worse.
In order to keep the quality of "fine and long hair"of the highest grade cashmere,
it is important to grow cashmere goats while being nomaded.
In winter, it is cold below 30 degrees Celsius below zero, and there is little food.
In such a harsh environment, only eating natural feed to grow, can produce high-quality cashmere.
The shepherds have always maintained their former life, which is closely ralated to the protection of the quality of cashmere.

The quality of the cashmere depends greatly on the timing of the hair harvesting.
The important thing is to reap during the spring.
If you miss the spring season, the quality of the hair will fall, such as dandruff, so you will not be able to get good quality cashmere.
But spring only comes to Inner Mongolia for a short time. Spring only comes for about a week in May.
In order not to miss the short spring, people should cut the hair at the timing.
Nomadic life is with cashmere goats.
It is because of their lives that we have the highest quality cashmere that reaches our closet..
It worth having a real piece in your wardrobe.
We want you to cherish that one piece and use it for a long time - that's our wishes.

A long time ago, there were various nomadic equestrian groups living in the Inner Mongolia Plateau 2,000 years ago or even more long ago.

Xiongnu, Xianbei, Turks, Mongols and other horseback races fought on the green land of Alashan surrounded by the desert, occupied, and established dynasties and empires.
With a temperature difference of more than 60 degrees between summer and winter, camels and horses carried luggage and people in the harsh deserted highlands, and cashmere goats and sheep sometimes became food, making them clothes to prevent the cold. In particular, cashmere goat milk was the best source of nutrition to restore the bodies of wounded soldiers.

Today, most nomads in the Alashan Plateau are Mongolians.
As summer approaches, peopel have to start collecting hair once a year before the short spring is over. The Mongolian father, Uchihara, puts each goat on his lap, which he cherishes like his family, and works on hair-raising with his familiar hands.
Goats also left themselves with peace of mind, and it became summer hair and it was a refreshing face.
Simk's mother, who was born in a nomad for generation and married to the nomads of cashmere goats, said, "I want to live here forever with 360 degrees of blue sky and spring sprouting land and carefully raising goats, as well as my favorite husband."
She answered me with a sunburnt smile.

Back to Page TOP